‘Decision-making’ is the process of effectively attending to and interpreting environmental cues, while integrating information from stored knowledge (i.e. memory), in order to choose an appropriate response and execute an action.

But what does that actually mean?

Well, for example, in a football scenario it could be something as simple as:

Playing in a behind-closed-doors friendly, a winger has the ball at their feet and sees the full-back coming towards them at speed from the front, while a teammate is in space to their right. Having been tackled in a similar situation previously when they tried to take the defender on, the winger decides the appropriate ‘action’ would be to pass to their teammate and then move into space to provide an option for another pass to retain possession and progress up the field.

Making decisions is easy, then. Right? It can be, but perhaps not always that simple.

As the great Lionel Messi says: “The best decisions aren’t made with your mind, but with your instinct. The more familiar you become with a situation, the quicker, the better your decision will be.”

Now consider the same winger in the scenario above, but it’s the Champions League final – their first-ever final, it’s raining, the stadium is a cacophony of noise, the ball hasn’t reached their feet yet, and there are two of the world’s best defenders pressing, and there are two supporting teammates screaming for the ball but both have opponents near them. There is another teammate arriving in space inside the box, though, but has the winger spotted them?

For some – like Messi – this would probably still be a fairly simple decision, but for most, it could pose a problem. So much to think about, so many things happening.

However, being able to make these decisions easier can be coached and developed in players, enabling them to be better and quicker at making the most effective choices on the pitch.

But to help players learn this, coaches need to understand the process of decision-making, and work on each of the aspects individually, and collectively, with their players.

So, what is the ‘decision-making process’?

The following image, adapted from studies by Gershon Tenenbaum (2003), explains this in greater detail. 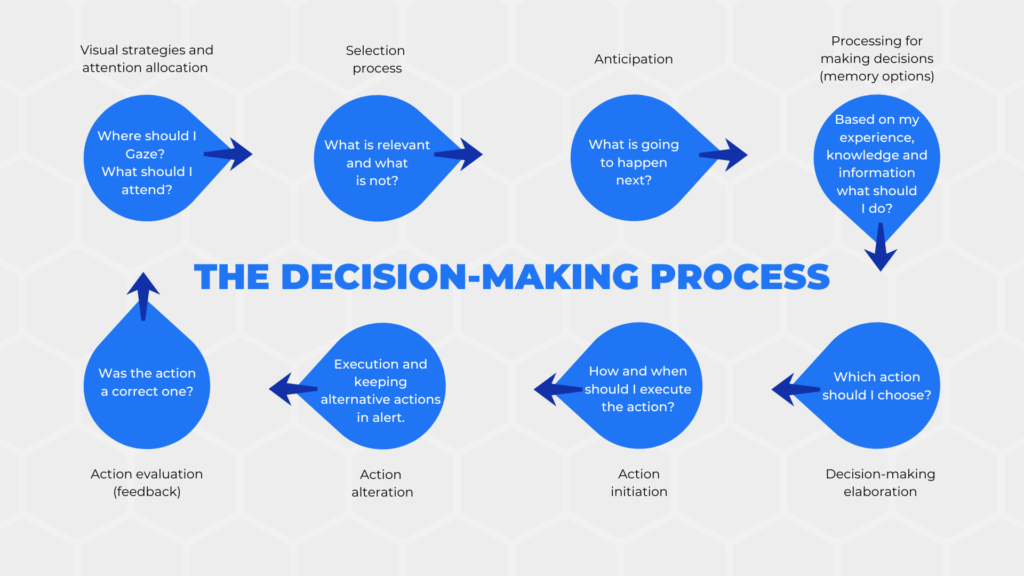 In terms of a football player’s decision-making, this process could start with what we would call ‘scanning’, being aware of what is around them – i.e. the ball, the opposition, teammates, space, etc. The player is ‘painting a picture’ and understanding what is and what isn’t important to them to enable them to make the best decision.

A crucial point in the decision-making model is the player’s previous experiences of similar situations – step four, above – which could have occurred in a game or a training session. The player’s memory of these situations would then enable them to choose an appropriate action and then carry it out effectively – steps five to seven.

From the result of that decision, the player would then evaluate whether it was successful or not, providing them with more experience to help them make a correct decision at their next opportunity – step eight.

This last step of the decision-making model is crucial to the development of the player. If the player does not experience and understand the reasons why another option might have been better, then it is likely that the player will repeat the same execution.

Exposing players to these situations and experiences in a realistic way is a key area where coaches can play their part.

In our coaching CPD course, Decision-Making In Football, our experts delve deeper into the science and theory behind decision-making to give coaches the knowledge that they can then use in their own environment with their players and teams.

The course looks at the skills needed to become a more effective decision-maker, too, i.e. awareness, scanning, anticipation, and shares examples of decision-making, as well as session plans and video practices to help you on your way.

That’s not all, on course completion, you’ll get accreditation to support your continued personal development journey as a football coach.

Sign up for our FREE 7 DAY TRIAL SUBSCRIPTION and take a look for yourself. Click the button below to learn more…

“This course is full of great information to help understand more about enhancing players’ decision-making skills and has given me lots to use with my team and with players individually, too. Well recommended.” – Callum H.

“This course has allowed me to reflect on how I conduct my training sessions and will challenge me to adapt my curriculum to develop more cognitively aware players with the goal of improving technical and tactical performance.” – Simon S.

“I thought the course was excellently put together with some fantastic knowledge. It cemented the steps of decision-making for me and gave me lots of takeaways to add to my sessions.” – Andrew T.

“The content is of a high-level and rather than some online ‘courses’ that just give you session plans, this course gives you the knowledge to create your own sessions and practices to focus on different aspects of the decision-making process.” – Elliot W.

Benefit From A MiMentor Partner Package

The Principles of Play: Session plans for work on defending and attacking