Hydration is vital, not only for football but for our general wellbeing – particularly during times of extreme heat.

For footballers, maintaining an optimal state of hydration during training and matches can become more complicated, depending on the type of activity and availability of fluid. But it is important that managers, coaches and the players themselves do what they can to ensure they stay hydrated.

Did you know that some studies of amateur football have found that around half of players are in a dehydrated state before they even begin a match? 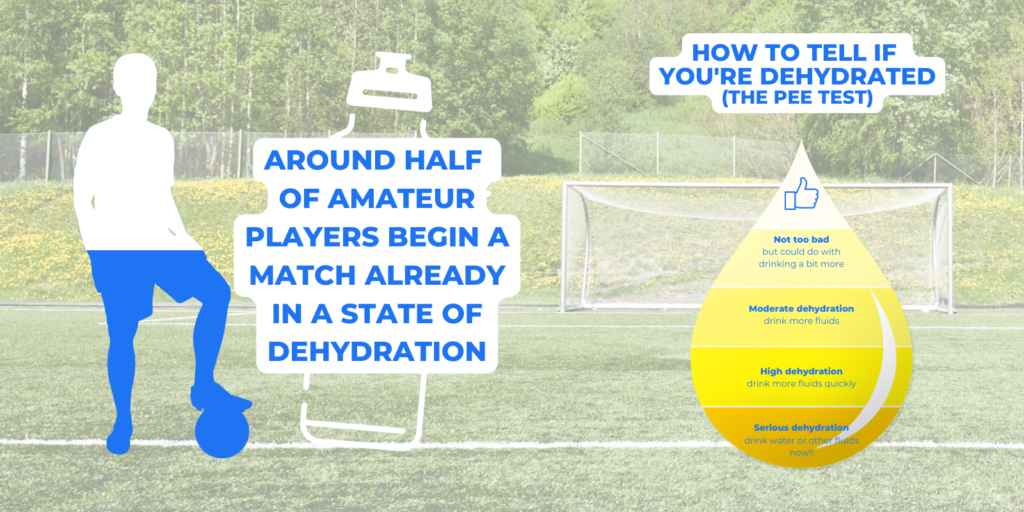 But how do we know if we are dehydrated or not?

The image above can be shared with players across a range of ages due to its educative nature and benefits particularly for youth players to understand the various stages of dehydration and when/how to act (i.e. drink fluids). The ‘Pee Chart’ on the right of the image gives a quick and easy measure for any player (or person) to understand where the current dehydration levels are which is vital in the summer when temperatures can sore.

If players are dehydrated before they start exercising, their core temperature will rise faster causing the cardiovascular system to work harder than usual, which will affect both their cognitive and physical performance. In some cases, it could even lead to heat stroke.

Dehydration is often a result of cumulative dehydration from previous activities in the lead-up to a game. It is quite a simple thing to combat by ensuring players drink enough prior to taking to the field, on the day and in the days leading up to a game. This will help you to get them performing at their best.

It can take time for fluids to be absorbed into your body. So, drink steadily during the day and aim to drink around 500ml of fluid in the two to four hours before a game or training session. If they feel thirsty or conditions pre-match/training call for it, then get them to drink more.

Optimal hydration is also dependent on many factors, but can generally be defined during exercise as ‘avoiding losses greater than 2–3 per cent of ‘body mass’, while also avoiding overhydration.

However, the fluid requirements of players are very individual, so to be certain of what a player needs can rely on factors such as personal sweat rate, and the type of activity they’ve been undertaking (a goalkeeper will be different to a winger, for example), exercise intensity, environmental conditions and exercise duration.

The availability of fluid during both training and matches may also influence the ability to optimise hydration during football activity. It is therefore wise to consider the following:

How Best To Hydrate

Water is always a solid option, as the array of sports drinks on the market can be overwhelming, and can contain lots of added sugar – not to mention the cost. So, it can be hard to know if they really offer any overall benefit to your players.

If players are doing moderate amounts of activity, sports drinks are not needed. Water is often the best thing to drink during and after a workout. But if the training session or match is fairly strenuous and intense, then sports drinks may be useful.

Sports drinks, or even just squash, can keep players going for longer. A study by St Andrew’s University (2015) also highlighted semi-skimmed milk as very good at the job of hydration.

As well as replacing the lost fluid, these drinks can replace the carbohydrates (sugar) and electrolytes (ie sodium, potassium and magnesium), which can be lost through sweat. They provide players with fuel and help to keep them hydrated.

Our new CPD Course ‘Hydration For Performance‘ will help coaches understand more about this vital area so they can help their players and teams to be in peak condition for both training and matches.

The course is part of our Nutrition For Football series, developed with Sports Nutrition expert Jen Carter, who works at the elite level of football in England.

Enhancing the intensity of your team